Wesley is now 16 months and is still very lovey and cuddly but also becoming more and more willful. He is pretty average sized for his age and is pretty much wearing 18 months clothes. He has 12 teeth now and getting his molars was not fun. I’m hoping we get at least six months off before getting any more teeth.

Wesley is finally getting on a pretty regular sleep schedule. He naps once a day usually starting between 11-12. We are lucky in that both our kids have been great nappers and Wes will usually sleep between 2-3.5 hours. Bedtime has been a little rocky lately but at least he has been sleeping from around 7:30pm to at least 5:30am and sometimes until until 7am. Our trip to Dallas kind of threw off his schedule but he seems back on track lately.

Wesley is a bit of a picky eater but honestly I just haven’t had the effort to fight it much. We usually just feed him whatever we are eating and then try to squeeze in a couple of his favorite things if he really hasn’t eaten much. He still loves the pouches of fruits and veggies, any pasta, bread, yogurt, cheese, banana and raisins. He will not under any circumstance eat broccoli, beans, peas, carrots, or most meat.  He probably drinks about 5 oz of milk a day but I just figure he will drink more if he needs it.

Wes is understanding almost everything that we say lately. Now if he actually chooses to listen to us is another issue. We have now had our first experiences with full blown tantrums, screaming and going totally limp when we try to pick him up. Often these have to do with toy sharing fights between Nolan and Wesley but can also start from something like us not letting him watch Frozen on TV. Nolan has really been trying to be helpful though.  Usually Chris or I have to get involved to mediate the two of them because otherwise it just leads to two kids screaming. I think a lot of the frustration at this age comes from wanting things but not being able to express it. Wesley is getting more words which I can see is starting to help some. He now says about fifteen or so words and some animal sounds and other things that don’t necessarily sound just like what they should, but he makes to same sound for the thing every time. He really does love to play the game where we ask him what animals say. He also likes to point out body parts on us and himself.

Wesley still loves Nolan more than anything else. In the mornings, if Wesley is up before Nolan, he will just stand at his bedroom door and make the sign for please. Wes will often sit next to Nolan while he plays Lego and Wes tries to put the guys hats on and off. They love to wrestle and chase and hide together in the closet. If Nolan accidentally trips and falls, Wesley will fall to the ground too.

Wesley loves to play with balls, shooting hoops in his little basket, hitting them off his tee, throwing them down the stairs so he can say “Uh oh.” Wesley loves to sit in front of a bookcase and pull all the books downs and flip through them. He carries them over to us and turns around and backs up to sit in our lap to read them to him. Wesley has really become interested in climbing and crawling onto things. He loves to climb up our side ottoman, over the side of the couch and then slide off the couch…repeat a hundred times.

This summer we have had lots of pool time, park time, walking the neighborhood and just overall relaxing. Wesley is really enjoying it and I love this age where it seems like he learns something new everyday.

Here he is sitting with Nolan at the preschool last day of school party.  He was so so happy to get a chair too. 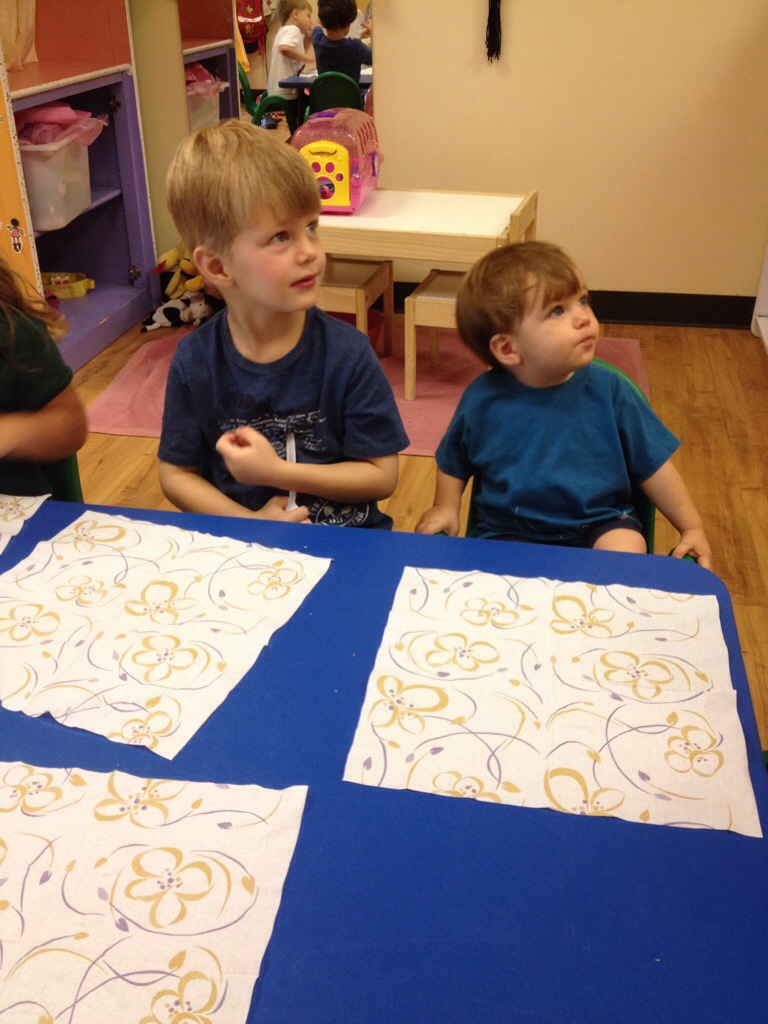 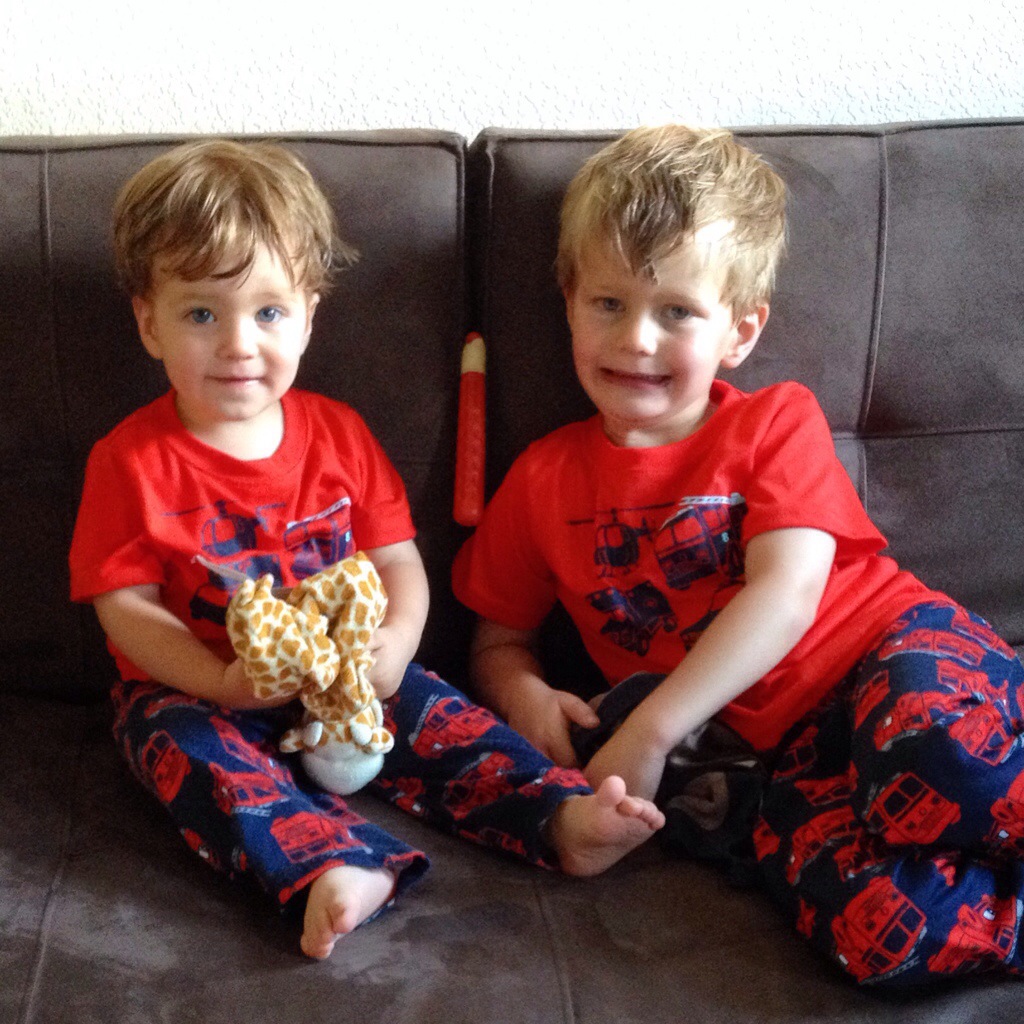 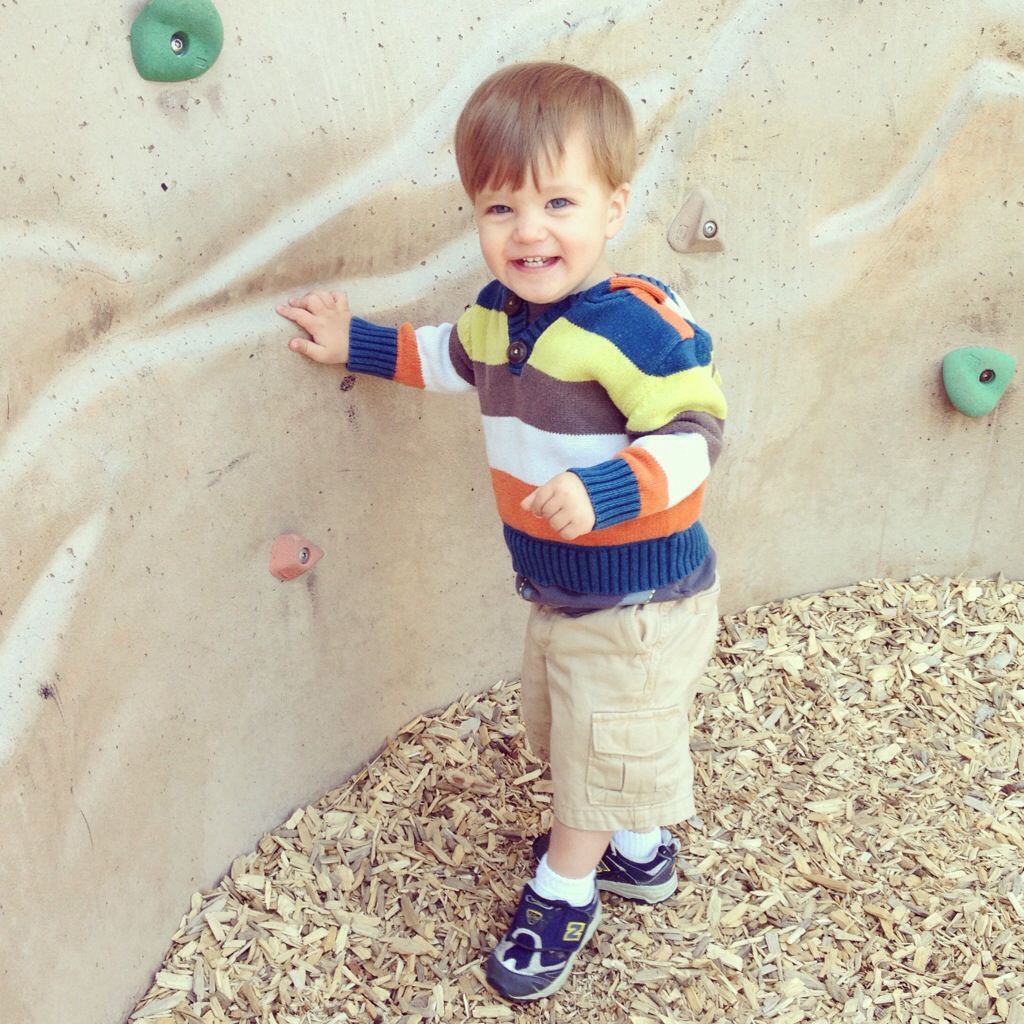 I couldn’t remember if I posted this one already, but Nolan got the idea to be an underwear salesman and Wesley, of course, had to be the customer. 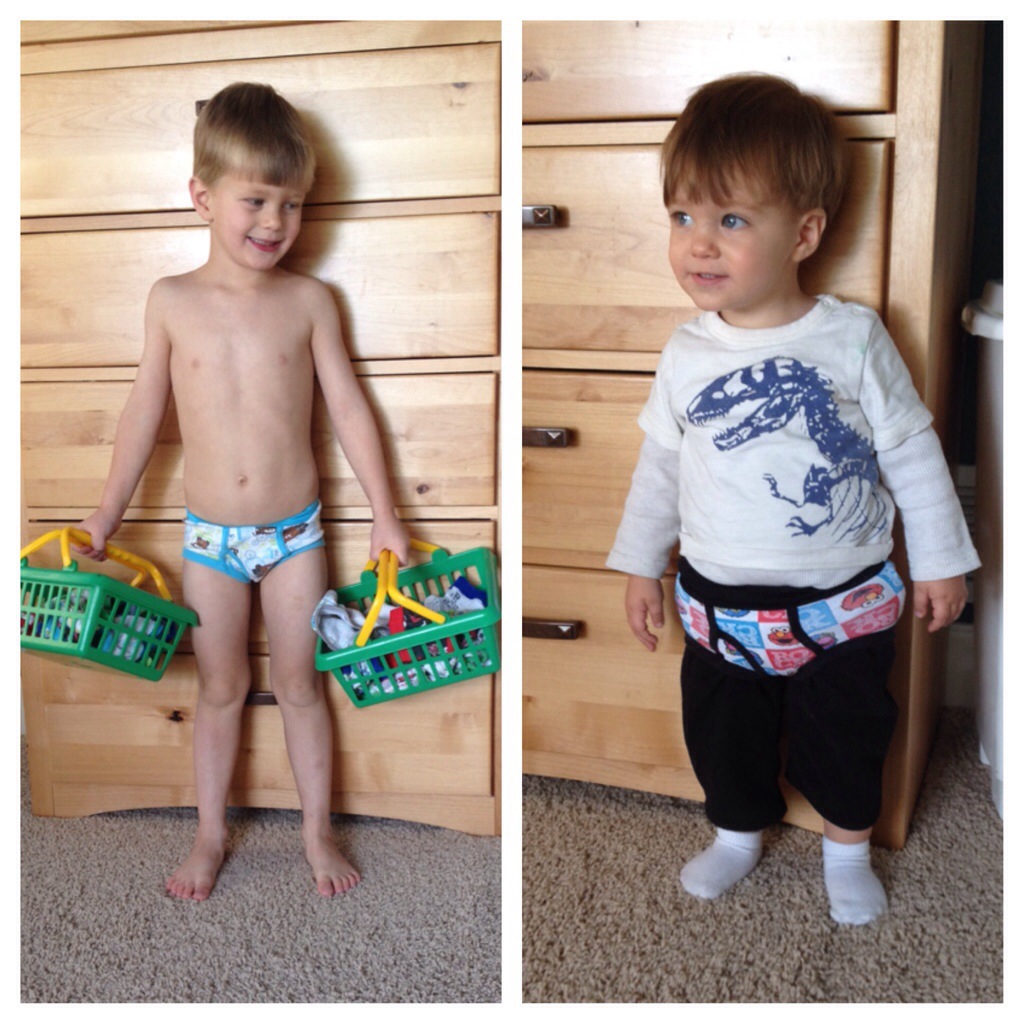 Petting the neighborhood cat Rosie.  This is also one of Wesley’s top 5 favorite things in life. 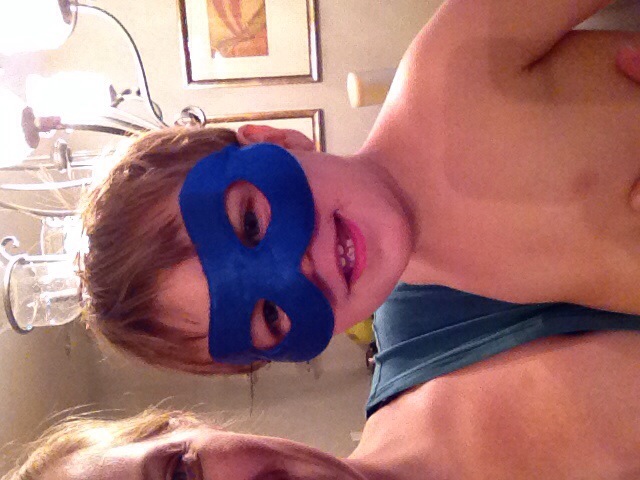 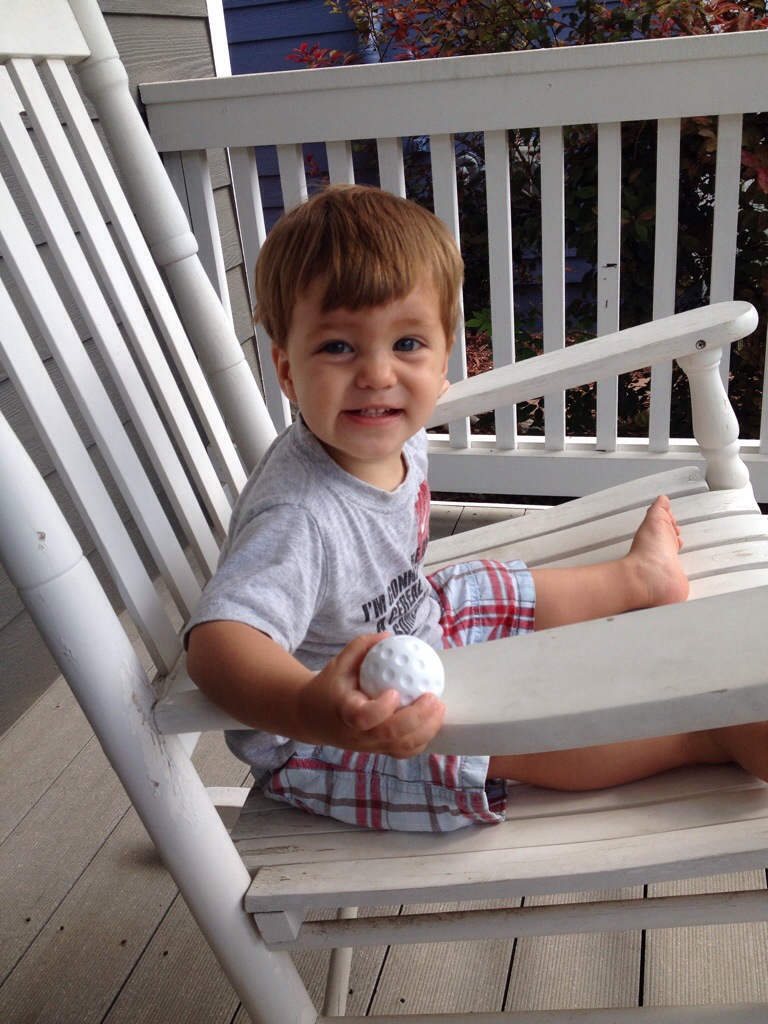 Pretty happy with himself here after he climbed the couch and then climbed to the windowsill all by himself. 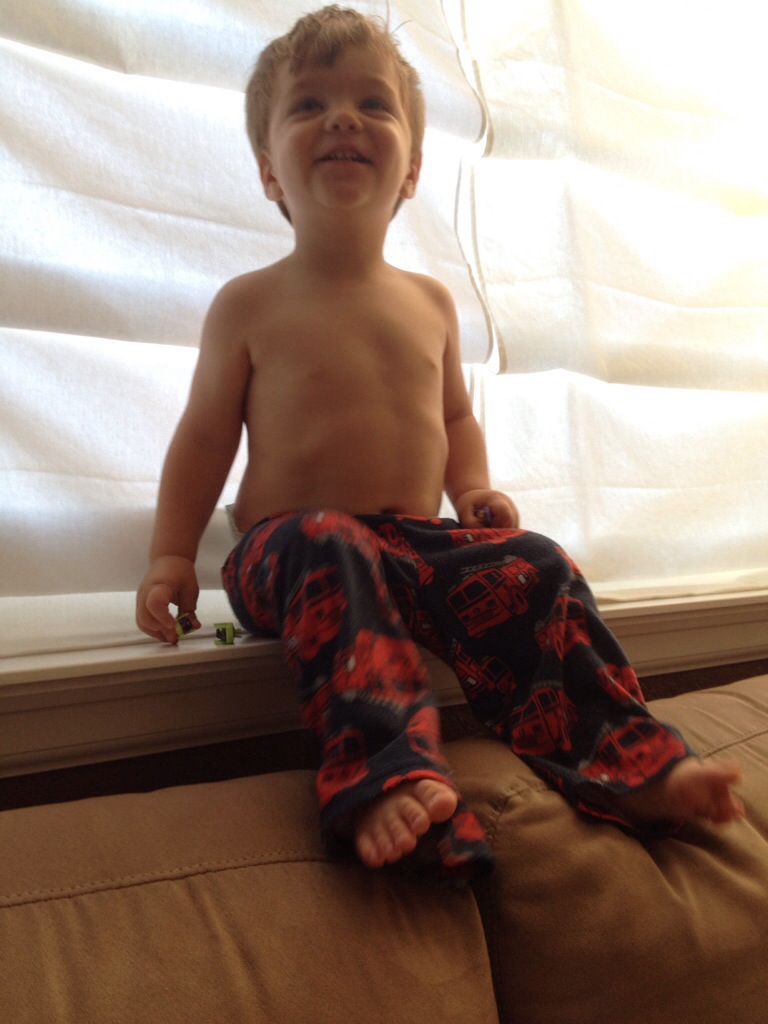 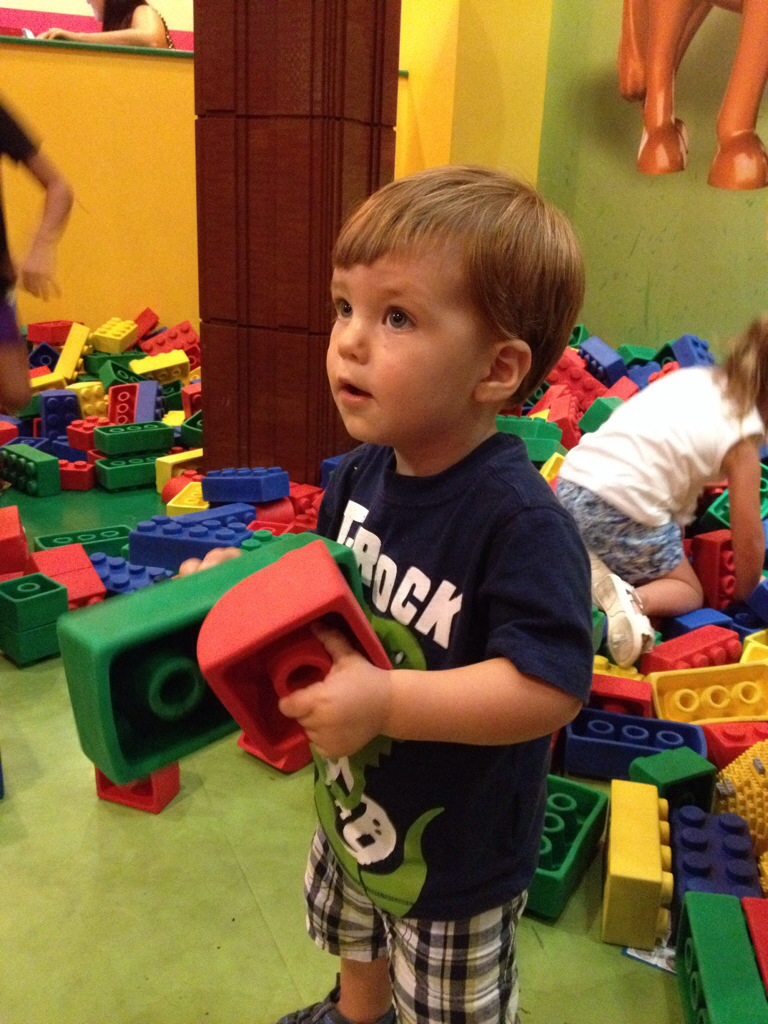 This entry was posted in Monthly Updates. Bookmark the permalink.

One Response to Wesley 16 months